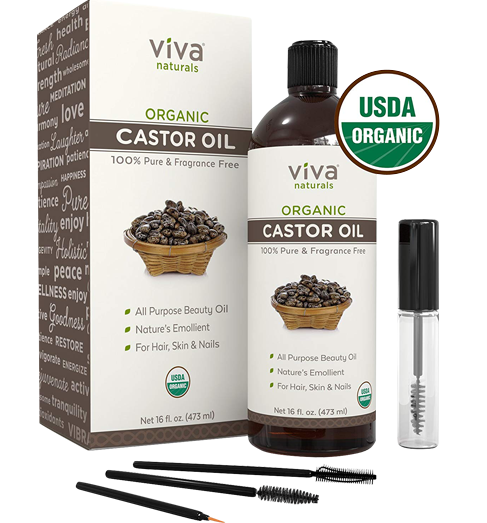 A Review of a Better than Ever Viva Naturals Castor Oil

Hello everyone. Michelle here. I just got the new bottle of Viva Naturals Castor Oil and let me tell you, it is legit awesome! When I first used this castor oil, I already liked it although I didn’t know much about it. Now they have made some changes to the packaging, accessories, and so much more. Their Castor Oil is also USDA Certified Organic now! Yey! Read the rest of my review below and find out what has changed. 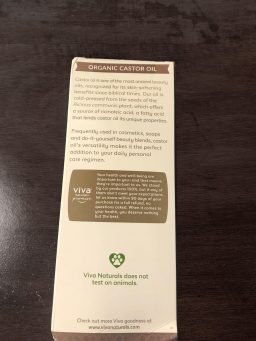 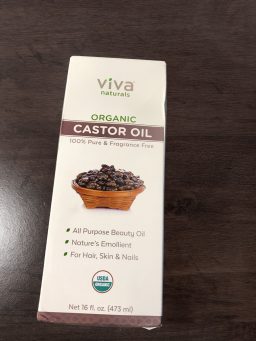 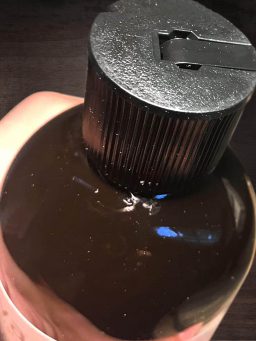 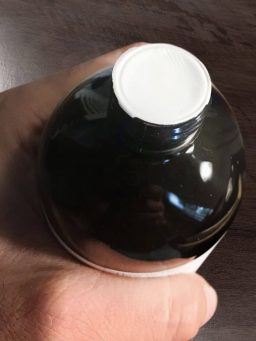 The packaging of the Castor Oil is first thing that has changed. The previous one was clear plastic and had a white disc press cap. This new one has an amber colored plastic bottle with a tiny flip up spout where the oil flows. This is a great feature because the castor oil won’t easily spill when you are pouring it on your hand. It also allows you to control how much oil to add to your castor oil recipe. Under the cap, there is a tamper proof seal. I had a slightly hard time removing the seal but when I did, I was greeted with the earthy smell of castor oil that I love. I still wish the container was not made with plastic bottle because as you know I really want my castor oil stored in glass bottles.

The accessories that came with the 16 oz. bottle of Viva Naturals Castor Oil was the mother-load of all accessories. Inside there’s a mascara wand, a tiny brush for hard to reach areas, a small clear bottle with another mascara brush, an eyebrow grooming brush, and a stopper. The accessories came with a clear plastic case so you can bring them all with you wherever you go. How handy is this accessory case!?!

The smell of the oil was earthy and all natural the way castor oil should smell.

After I was able to take off the tamper proof seal, I capped the oil to test the flip up spout. The oil flowed easily on the spout and I was rewarded with a light yellow colored oil that’s almost clear. As I said earlier, the smell of the oil was earthy and all natural the way castor oil should smell. The oil was not as thick and it quickly absorbed on my skin when I applied a few drops. It left a slight sheen to my skin that I love. Did I mention that the castor oil is now Certified Organic by the USDA? Good job on this, Viva Naturals team. This was one of my concerns on my first review and now the oil is certified! 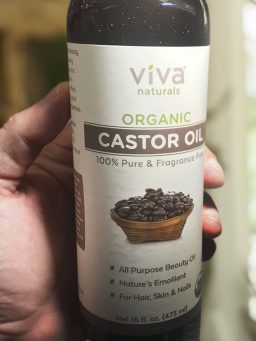 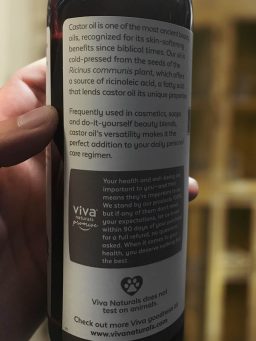 I used the oil for only about two weeks and I already noticed a few hairs growing especially on my eyebrows.

So… huge bottle of Viva Castor Oil. What to do first?

I was excited to use the accessories so I filled up the mascara vial with the castor oil. The opening of the glass vial was a bit small but the spout made it easy to control how much oil comes out of the bottle. I placed the vial inside my makeup bag and did my regular thing. I brought the vial with me wherever I went. Despite all the movement inside my bag, the vial did not spill nor come loose inside my makeup kit. 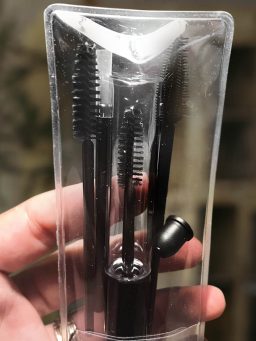 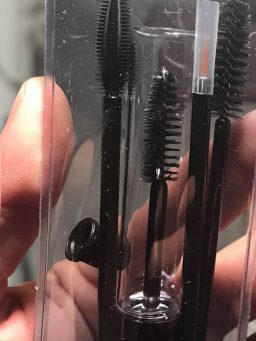 Speaking of cleaning my face, if you’ve been following All Castor Oil Review for a while now you’d know that I like using castor oil for oil cleansing. The certified organic Castor Oil from Viva Naturals is the perfect oil for the job. I placed 2-3 drops of oil on my face and just swirl the oil around using my fingers. I make sure not to pull to forcefully because that will just make my skin sag in the long run. After my face and neck area is coated with oil, I rinse it with lukewarm water. The warm water washes away the oil so I don’t need a facial cleanser. I would then pat my face dry with a super soft towel and I’m done! So refreshing! Using the castor oil for oil cleansing moisturizes my skin at the same time so I sometimes skip the moisturizer.

Using the castor oil for oil cleansing moisturizes my skin at the same time so I sometimes skip the moisturizer.

Have you heard of castor oil packs? I did an at home one using Viva Naturals Castor Oil and it did wonders for my body. I was feeling sore around the knees about a week ago. My sister told me, ‘You love castor oil so much why don’t you make a castor oil pack?’ She was right so I made one. I heated about a ½ cup of castor oil and soaked the compress in the hot oil. When the temperature isn’t too hot anymore, I placed the pack on my knees. It felt heavenly! After about 30 minutes, I removed the pack and rinsed the area with soap and water. 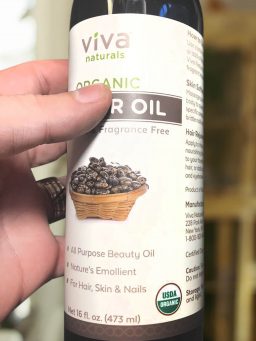 The new Viva Naturals Castor Oil is truly an improved version of their previous castor oil. They went all out with their accessories and the oil absorbs better and faster. I love how easy it is to use this oil, to take this oil anywhere, and to transfer the oil from one container to another. I love what it does for my skin and my sore knees. The huge 16 oz. bottle really goes a long way. I still have about two-thirds left of the oil and I intend to use it for some of my DIY blends. I’ll update you as I go along.

Viva Naturals started in 2011 by a group of people who just want to know about wellness. They source their products from all over the world to give you ‘Mother Nature’s finest’ and best natural products. They’re very hands on when it comes to developing and quality control of their product so you know you are always getting the best. Other than Castor Oil they have yummy Cacao Nibs and Goji Berries. They also have supplements and essential oils.

Viva Naturals has tons of great offers for everyone. If you order $59 or more, you get free shipping! They also have a Pay Nothing Guarantee™. This guarantee means if you are not 100% satisfied with their product, you can get a refund of 100% the product price.

The oil is not too thick and absorbs quickly.

Works great for oil cleansing and when used for castor packs

Free delivery for Orders $59 and over. 100% Money back guarantee.