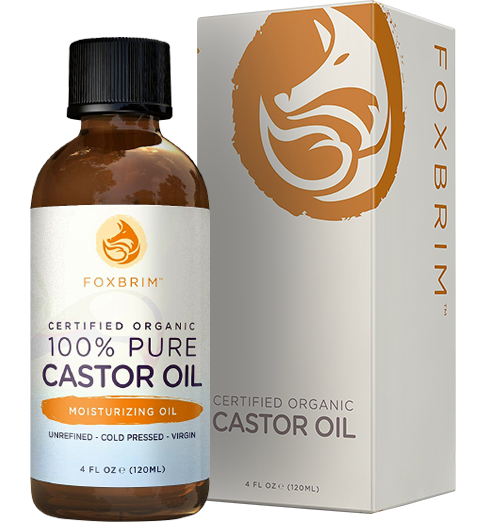 Editor’s note: This post has been updated with a DIY castor oil exfoliator recipe. See How FoxBrim Castor Oil Looks and Feels section of this review.

Today I’m going to talk about FoxBrim’s Castor Oil. This product is organic and Hexane free, which means no harmful chemicals were used when creating this oil. It is also cold pressed and unrefined. Let’s begin, shall we?

I came across this castor oil from FoxBrim because that orange fox logo caught my eye. It looked really cool. I like that the product had its own box when it was delivered to my house. I also liked that they included instructions on the box on different ways I can use the oil. I can use it for my body, my hair and my face. 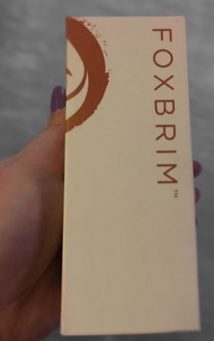 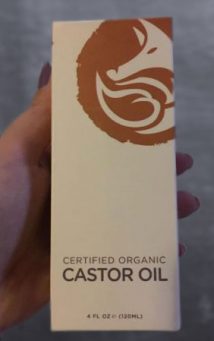 I found the oil very thick. High-quality oils are usually thick and this to me looks like good quality oil.

The oil smells slightly earthy to me. Not overpowering or anything like that. You know how when you are gardening and you’re just digging around the dirt, planting new seeds. That’s how it smells like to me. Mark said it smelled slightly like coffee beans. The oil’s color is pale yellow. It won’t stain your clothes so don’t worry. 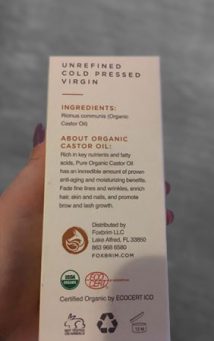 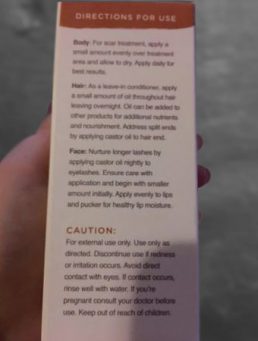 I was pleasantly surprised that it just absorbed into my skin easily.

When I applied the oil, I was pleasantly surprised that it just absorbed into my skin easily. I expected it to be a bit like olive oil and that it takes a while before it goes into the skin. But this one, it got absorbed into the skin really quickly. I prefer to use essential oils like castor oil instead of regular face creams to moisturize my face. They’re less harsh on my skin and I don’t get breakouts. I also save a lot or money by making my own moisturizer using a mix of different oils such as castor oil.

Another thing that I love about this oil is that I can combine it with other beauty products. I used the FoxBrim Castor oil to create an all-natural exfoliator using organic sugar and almond oil. I use sugar because sea salt makes my skin dry for some reason. I scrubbed the mixture into my face and then left it on for like 10 minutes. I love how my skin felt really smooth after I used this simple DIY exfoliator.

Updated Castor Oil Exfoliator Recipe: I went to the spa 2 weeks ago and realized that they didn’t just put cucumbers in your eyes for no reason. Cucumbers contain properties to help swollen eyes and burns. So I had an idea to integrate cucumbers into my skin care regimen.

Add sliced or minced cucumber with the castor oil, organic sugar, and almond oil. The cucumber makes the exfoliator more refreshing and it also soothes skin irritations. Include the peel; it contains elements that keep the skin from sagging. 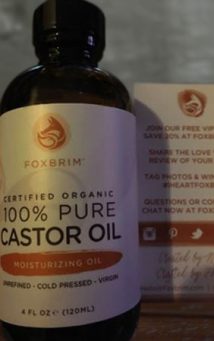 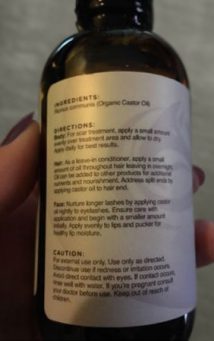 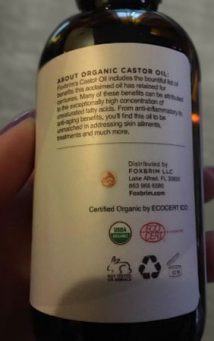 I also tried the oil on Mark’s hair because Castor oil can help with hair growth. I mean Mark’s not really trying to grow long hair like a rock star or anything like that. He gets his hair trimmed every 6 weeks or so. I just wanted to see if it can really make any difference and so Mark became my (un)willing guinea pig. Let’s see what happens.

Castor oil is also great for growing eyebrows and eyelashes. I recommend applying a few drops of this oil on a disposable mascara wand and just apply it at night before you sleep. Eyebrows can become thicker and fuller the more you use castor oil.

The only thing I hate about it is that it didn’t come with a dropper or anything.

Overall, I really like how this oil turned out. I love the smell, the texture to me is just right and it’s very effective. I highly recommend this product to anyone trying to grow their hair. I love using it as a moisturizer and mixing it with my other beauty products too. It really works and I love it.

Check out FoxBrim’s website and find some amazing promos they have going on. They have this promo called ‘Give $8, Get $8’ where you get rewarded when you refer a friend to FoxBrim. Your friend gets $8 to spend on any products offered on the website upon referral and you get $8 once they make a purchase.  It’s a win for both you and your friend. The more people you refer, the more rewards you get.

Other great offers happening right now at FoxBrim include the VIP Club. When you join this club you can get 20% on your first order and exclusive deals. You also get to be the first to try the newest products and get insights to the different FoxBrim products and other healthy living information. Check out their website and learn more about what they have to offer.

Bottle has own box complete with logo. No indication if packaging is recyclable.

Oil is thick, smell is not that strong, absorbs easily on skin.

Free delivery for orders above $30. Money back guarantee.